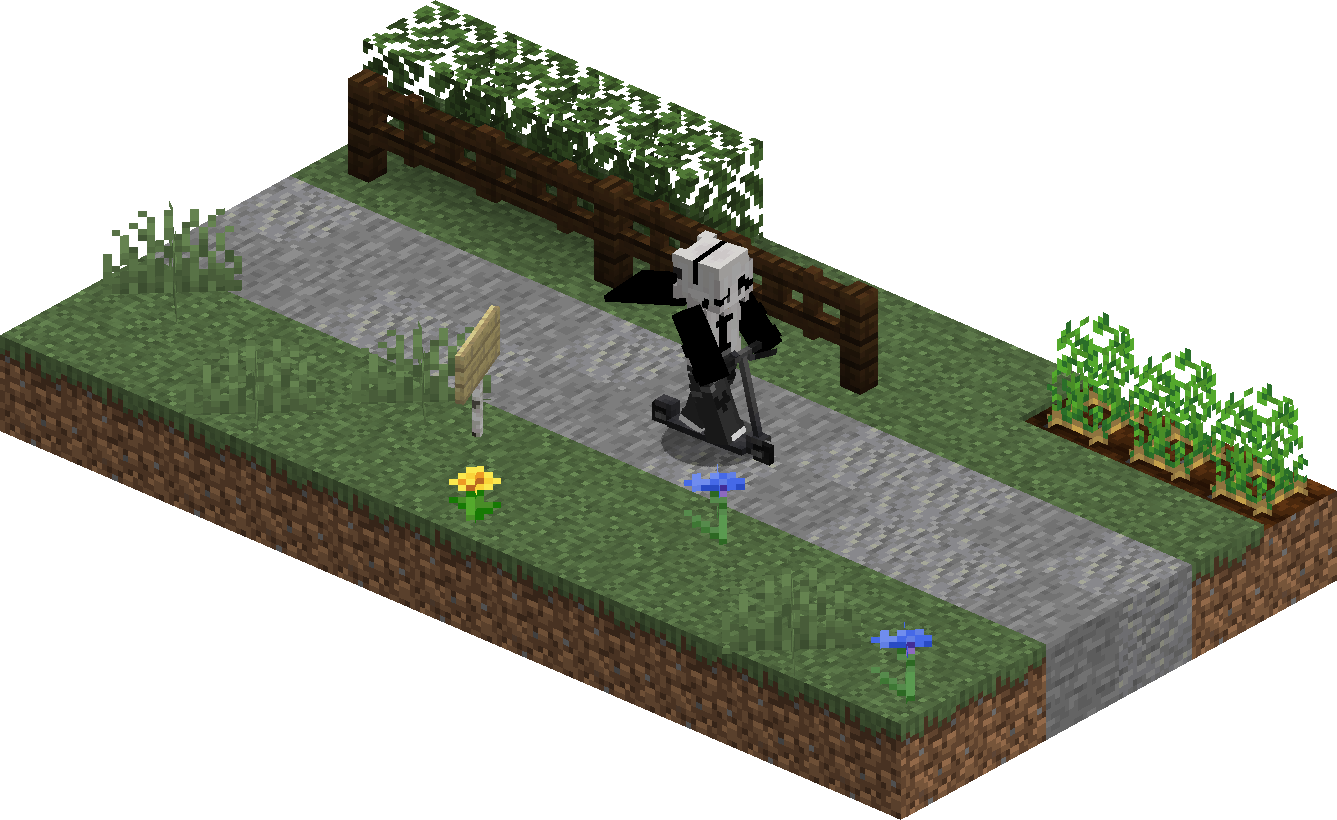 Everything on this page is something I've thought about, it should give a rather clear picture of my understanding of transportation in Minecraft.

How does it work with vanilla?

I've designed Scooters mod scooters to be as intuitive to understand as possible from a gameplay perspective. Grounding in reality but allowing myself some creative freedom, I've pretty much settled on two models, a kick scooter and an electric powered one, as they're pretty much the only kinds of standup scooters the average player is likely to have encountered, or at least heard of.

Also, the real vehicle itself in the most basic configuration has really simple construction: nothing complicated like an internal combustion engine, or even a steering column for that matter. Two wheels, a platform to stand on, and handle bars. Hell, there even exist 100% wooden, freight scooters from the Congo, known as chukudus.

Doesn't it kill the horse?

To me, the thing with horses is that they have an AI and aren't really convenient because of that. If you don't have fence posts around where you go, then you're out of luck for parking spaces. You'll also need to sacrifice an inventory slot for a lead. Also... I don't like the aesthetic of horses in all honestly, they're horses for crying out loud and I'm a little more industrialized. They're the second fastest land vehicle in vanilla, bested only by boats on ice.

They will continue to be the second fastest land vehicle because electric scooters are limited to 13.2 m/s (47.5 km/h, 29.7 mph), mostly because ground movement at high speeds becomes very glitchy walking up steps. On a more fair level, the kick scooter is limited to 8 m/s (28.8 km/h, 18 mph) and will consume hunger, albeit at a slower pace than even sprint jumping. Comparatively, the fastest horse runs at 14.6 m/s (52.5 km/h, 32.8 mph) and consumes no hunger.

Horses don't need infrastructure other than fence posts for parking, they can step up full height blocks, whereas scooters can only go up slabs.

Ping​hopping is a great way to go places very fast, very nimbly, using little hunger, and needing little infrastructure. The problem with it though, is that you need ping and unlike me, most players don't like ping because things are not instantaneous, not to mention this is completely unintentional. Not everyone can do ping​hopping because they're physically unable to do it in the time it takes for a round trip in the network, or they're playing singleplayer.

So, the kick scooter is a side grade to your average horse. You need a little bit of infrastructure but other than that it should be better than sprinting because you get to keep your momentum, but you destroy your shins. This means that the kick scooter is a good early-mid game land transport, but is easily outshined by end game solutions, such as elytra or a ice boats, meaning that my mod will have no use if I don't add an alternative.

And so comes the electric scooter - should use up no hunger, should be relatively cheap and fast and require little effort in building infrastructure, but it shouldn't be so fast it deprecates boats on ice nor it shouldn't be so cheap people forego other solutions. I had to put my brains in it and start iterating, higher top speed is a must, but what else, maybe a sleek look to it.

I ended up making a sort of racing scooter: better acceleration, better turning, better braking, higher top speed, more momentum. It's hardly on the speed of aggressive elytra flight or a boat on even packed ice, and it's moderately slower than a piston bolt, but jolly me isn't it stylish. The caveat of course is that you need to worry about energy management, which should be fine end game: either a potato farm or recharging stations that need redstone.

The physics are deliberately simple because any input can drastically change the trajectory, and given enough speed can keep the player on edge, which is just fun in general! People in real life strap themselves to ground rockets and do laps around places at 200 km/h. Also, simpler physics are easy to grasp, and easier to implement, and it makes sense in a game like Minecraft, you can't stumble over yourself so why would you be able to fall off your scooter?

On a different note, moving around and taking a sharp corner at nearly 50 km/h (32 mph) while staying completely upright looks silly and downright goofy. 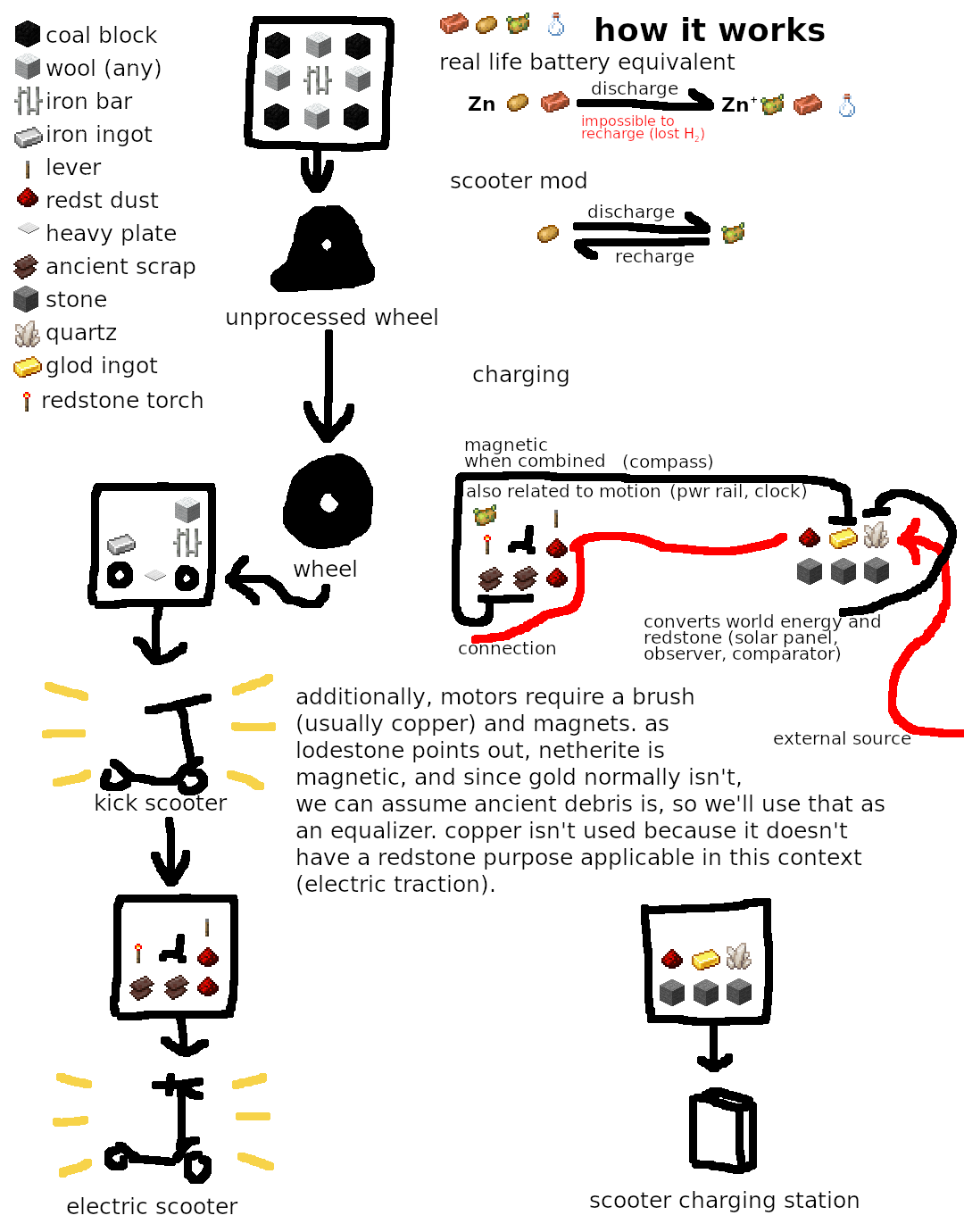 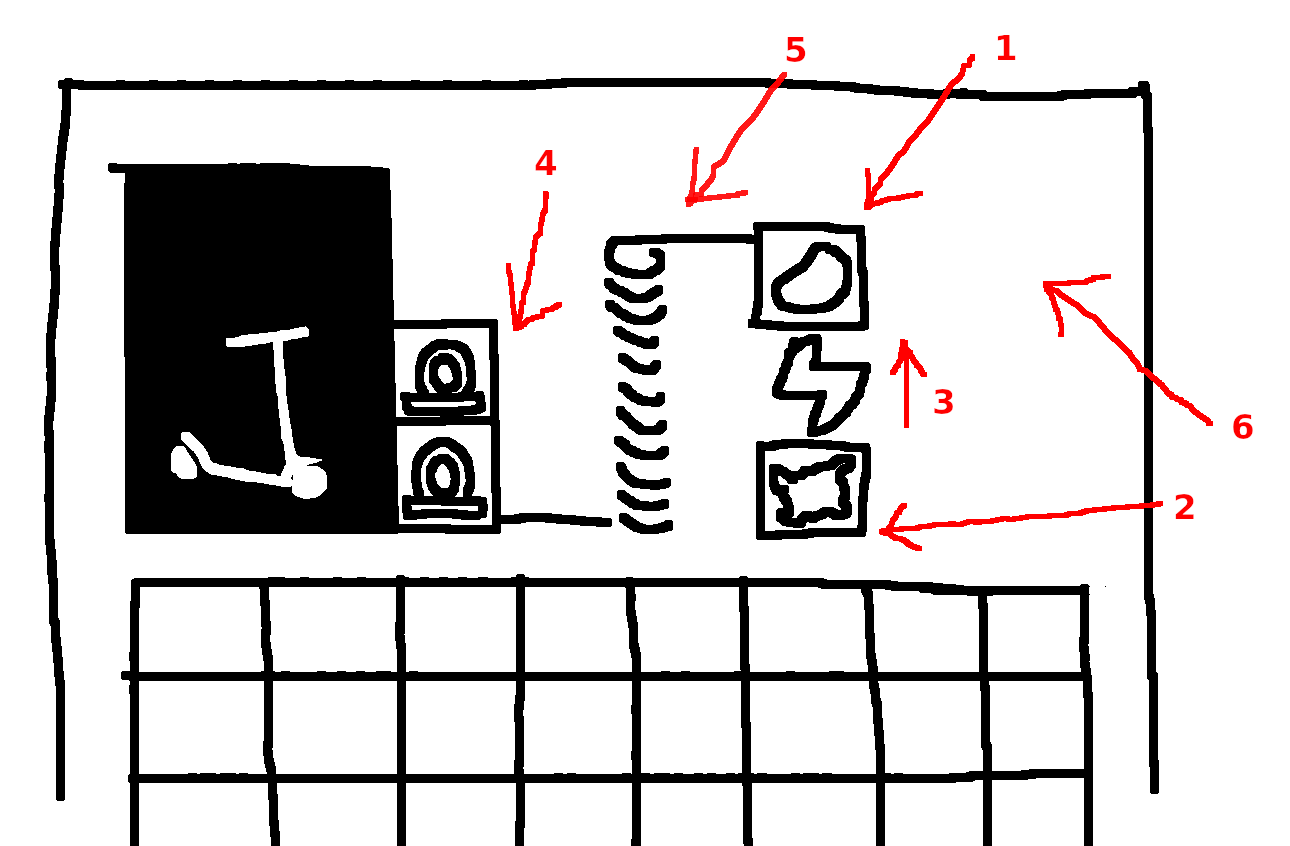